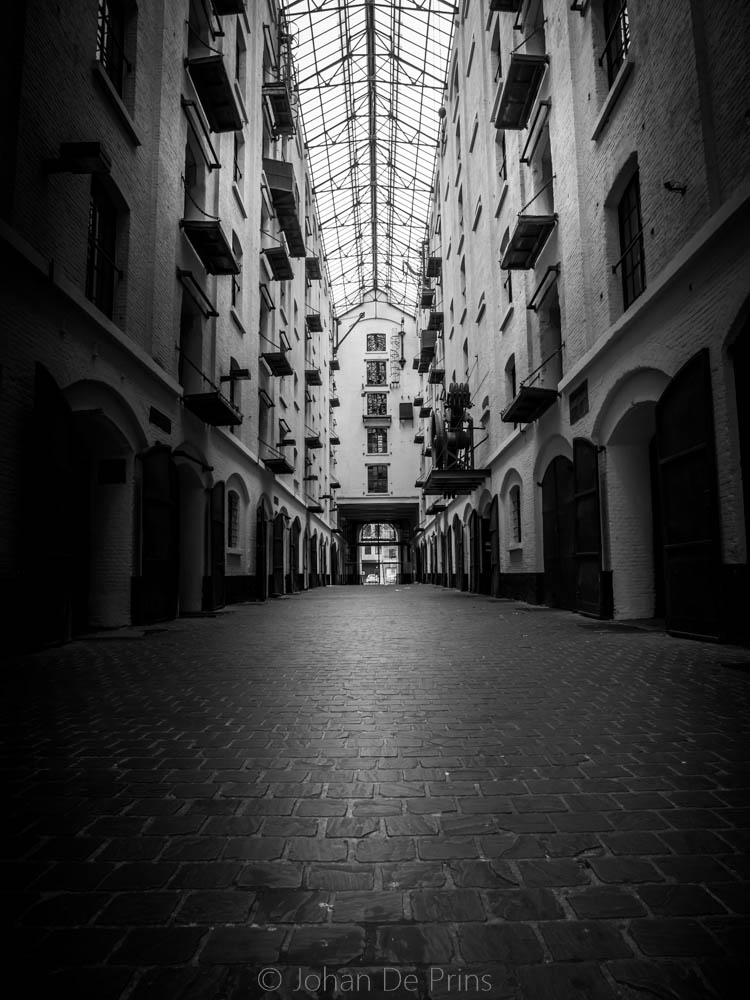 Johan De Prins
0 Like13
This photo is copyrighted by the author.
Thank you for respecting the rights and efforts of our photographers. Please contact the author for further information.

Add photoBookmark
This neo-classical-style warehouse was built in 1858 to a design by the architect Felix Pauwels on behalf of the Compagnie Générale de Matériels de Chemin de Fer. The warehouse was used to store - initially colonial - bulk goods such as sugar, tobacco, tea and coffee, hops, grain, cheese and wine. The stacking house with a stacking area of 22 405 m2 comprises two wings connected by an inner corridor crowned by a glass roof.

The complex had an eventful history. After a fire in 1861 it was rebuilt with the addition of a glazed passage between the moulting of the Old Lion and the Godefriduskaai. During the reconstruction commissioned by the Societé en Commandité de l'Entrepot, existing building elements were recovered, such as the cast iron columns on which wooden girders rest. The building continued to function as a stacking house until 1975.


The Sint-Felixpakhuis is one of the most important examples of a 19th-century warehouse ("bonded warehouse") on Antwerp's Eilandje.[3] In 1976 it was protected as a monument and until 1997 it was abandoned.

Translated with www.DeepL.com/Translator // tekst from wikipedia

Best by public transport if you are in the city. By car use underground parking nearby
Crowd Factor A decent amount of people
Best Timing Daytime
Sunrise & Sunset 06:48 - 20:36 | current local time: 04:34
Locations AntwerpAntwerpen Eilandje
Photo Themes black and whitecityscape
Please log in or sign up for free to see the exact geo details for this spot on a dynamic map.